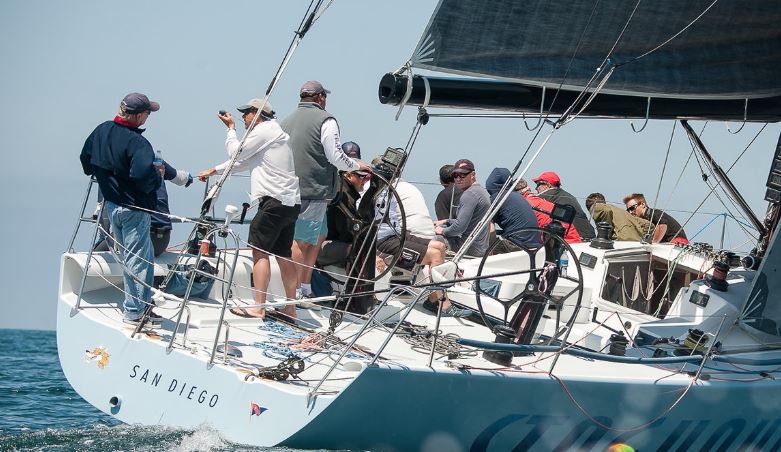 Yachting Cup is San Diego Yacht Clubs premier buoy racing event held in San Diego California.  Boats from all parts of Southern California show up as well as a few international guests showing up.  One boat came from Germany and Another from Acapulco Mexico.

On Friday night San Diego Yacht Club host the Ton Cup, a random leg course that gets crews warmed up for the weekend’s event.

In class 1, Staghound the R/P 50 had close racing with the two Transpac 52’s Pendragon and Nimbus.  Staghound came out on top winning the Ton Cup.

The weekend racing was an ideal San Diego conditions with smooth ocean swell and winds from 8-12 knots under sunny skies.  The second start was a combined class of similar boats scored separately.  Staghound kept up their momentum winning all 5 races over the two days.  Bretwalda 3 Bob Pethick’s Rogers 46 did the same in the other class of the second start.  The things these boats have in common is not only the 100% Ullman Sails inventory is Staghound had Chuck Skewes of Ullman Sail San Diego and Bretwalda 3 had Wally Cross of Ullman Sails Detroit.  To keep up the team competition of the two Ullman Sails sailmakers, they kept score on the corrected time between the classes.  Staghound won 4 of the 5.

In the Beneteau 36.7 fleet once again Chick Pyle and Kea had a comfortable win, they didn’t have to sail the last race.  Kea has won every regatta they have attended for the last 5 years.  They also have a 100% Ullman Sails inventory. Other boats had professional sailors but still could not take Kea off the top of the podium.

The Schock 35 fleet had a good showing again.  With Whiplash the fast team of Thompson, Tossbach, and Basadre taking all but one race dominating their class with the 100% Ullman Sails inventory.

Of all the classes that had boats with Ullman Sails, only one class was not won.  Ullman Sails had the most dominate boats in the regatta and almost every class. Results

For information on how to improve your performance for the next event.  Contact Chuck Skewes at Ullman Sails San Diego.