The Un-coding of Spinnaker Coding 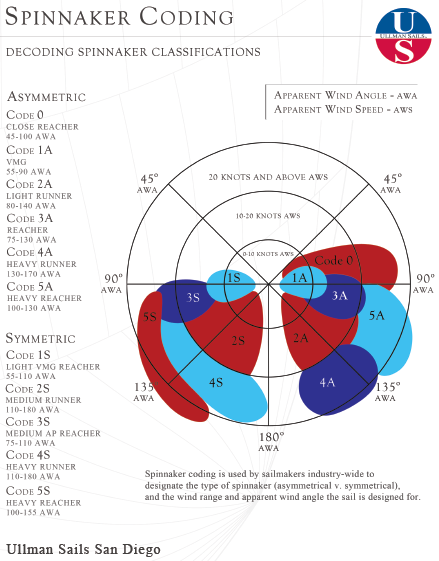 You may have seen it or heard someone talking about it after the race.  Code 1A, Code 3S, what are they saying?  Is it secret?  What code are they talking about?

It may sound like they are talking code but it is the spinnaker designation that has become a standard industry-wide.  The code is easy to break and once you know it you will be able to completely comprehend the talk around the club.

The spinnaker designations are simple “A” means Asymmetric and “S” means Symmetrical.  The numbers signify the wind range and angle that they are built for.

Here is a table showing the spinnaker designation and the wind range for each.

The Code 0 has become famous over the last 6 years is an Asymmetric spinnaker that works like a genoa.  Since it has a mid girth is more than 75% of the foot length it measures as a spinnaker but for all intents and purposes, it is a genoa. It measuring as a spinnaker allows a boat to have more upwind light air sail area without taking a rating penalty since only the largest spinnaker is rated.  This works especial well on boats with a masthead spinnaker and that is fractionally rigged for headsails. See the article on Code 0’s