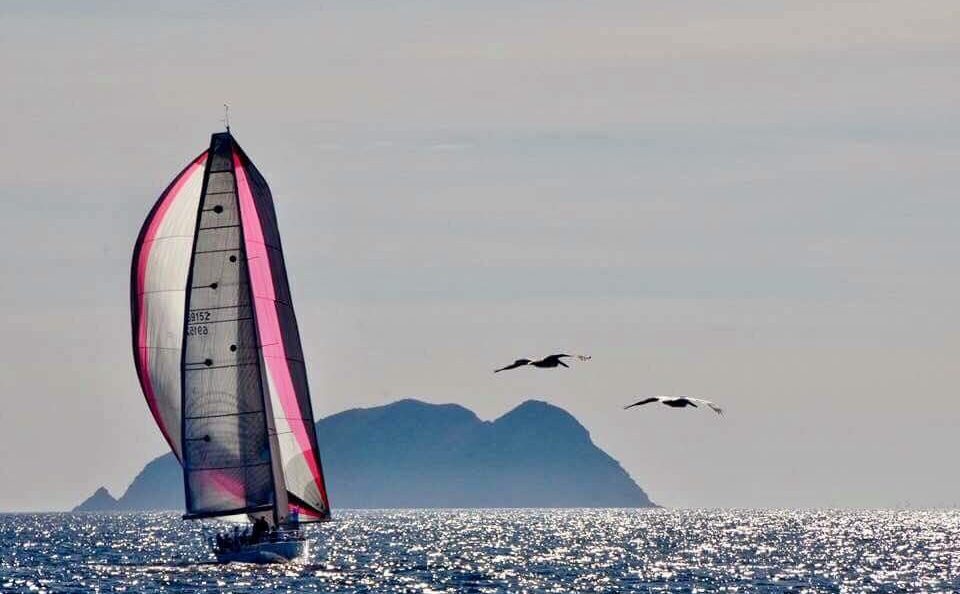 You round the weather mark in good position.  The wind is light with slight puffs rolling down the course.  As you work your way to the leeward mark sailing as deep as you can while keeping your spinnaker full you notice a puff coming down the course and a boat that was sailing higher now is sailing your angle at more pace.  When the puff goes away the boat gained or even passed you.  Why did he have more speed when the puff hit?  How did they gain so much? The real answer is not how the boat sailed during the puff but how they sailed before the puff.  They were sailing higher in the light air and kept their speed up so that when they had more wind the boat was already accelerated and they just sailed a lower angle.  Boats already sailing low had to use the energy to accelerate the boat rather than making the way down the course.  Keeping the speed up when the puff passed kept the apparent wind forward for a while and allowed the boat to sail lower for a while.

I have spent many years coaching people around the racecourse and continually looking for a scenario to help explain sailing angles downwind.  Everyone knows you have to sail higher in light air and lower in heavy air but why does this work? I would often get people questioning the reaching in light air theory.  I even had an engineer stay up all night and come to me with diagrams on how a spinnaker should be made to sail directly downwind.  Then I asked him if an ice boat that is capable of sailing at 3 times the wind strength would get to the leeward mark faster by going directly downwind at the same speed as the wind.  He quickly did some calculations and realized a flaw in his theory for his design. So how do you compare sailing downwind to something that almost everyone has done in their life?  How do you simplify the theory so that people understand it?

One evening I was heading home here in San Diego, driving up the hill from the loft, 2 kids were riding their single speed beach cruisers up the hill in front of me.  They were crisscrossing the street back and forth to get up the hill without having to get off their bikes and push them since beach cruisers only have one gear.  I was reminiscing about when I was a kid in the same scenario.  We would ride back and forth up the hills having to ride a lot further but being able to still pedal up the hill.  The more you went sideways to the hill the faster you could go but travel more distance.  You would build up more speed before making your turn to the other side so you did not stop in the middle of the turn.  Watching these kids made it clear that sailing downwind is exactly the same.  These kids had VMG (Velocity Made Good) figured out and they had probably never even heard the term.  Sailing a boat downwind in light air is just like riding a bike up a steep hill.  Sailing a boat downwind in heavy air is like riding a bike on a flat hill.  Looking for more wind is like finding the flattest hill to ride up.  Jibing back and forth is the same as crisscrossing the street.  The more wind (flatter hill) you can take a more direct route.  If the wind is light (steeper hill) you have to sail more perpendicular to the wind (street) until you find an angle that still gets you to your destination but also keeps your speed up and sails full.  The higher the speed potential of your boat (higher geared bike) the more you have to reach (crisscross at steeper angles) to get the best VMG.  If you have a slower boat (or a bike with low gear) you can go straight to your destination at a slow steady pace. 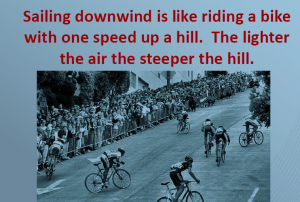 Figuring out your optimum angle can be a little tricky but is one of the most important resources you can have to gain peek performance on the racecourse.  It is always faster to have a target boat speed on the run even if it is not 100% correct than allowing the boat to slow down and have to get back up to speed again.  There are many target boat speeds available on the internet and from your local sailmaker or naval architect. It is best to find polar charts that match your boat or a similar boat and take notes on what works and what does not.  In a short time, you will have the optimum numbers for sailing downwind and your performance will improve. 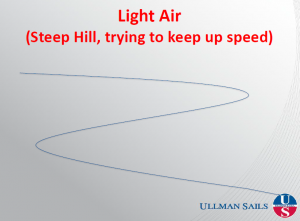 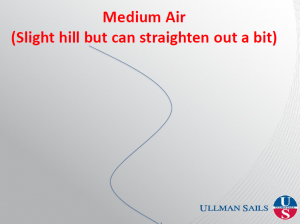 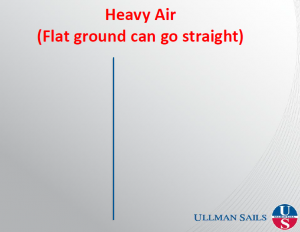